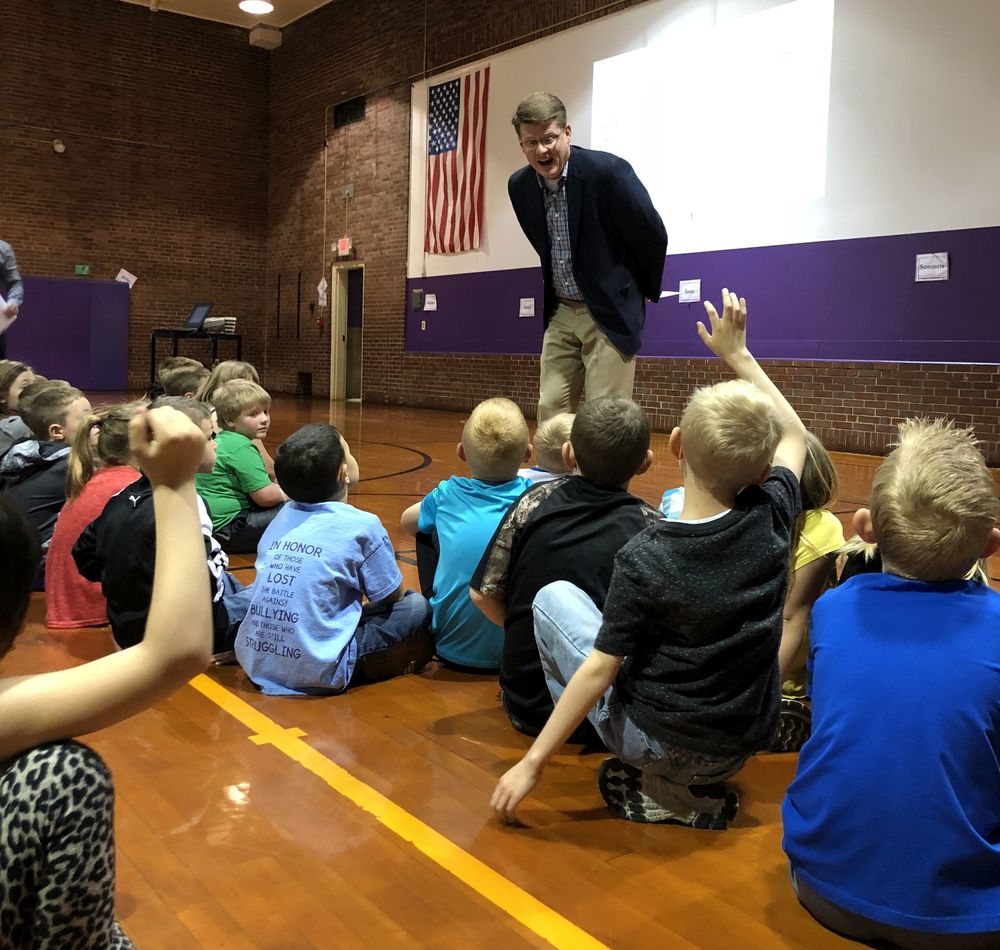 On Monday, April 30th, Jerry Yockey addressed Main Street & Kindergarten student-leaders regarding Leadership. Jerry Yockey is Vive-President for Shelby County State Banks. He is a Financial Advisor with Investment Planners. He is also Chairman of the General Dacey Trail. These are diverse Leadership positions.

Jerry began making a personal connection to Main Street School & identifying with the students. Jerry attended school at Main Street. He sat in this gym. He learned to read. He did ask, “Do they still teach Math here?” The students laughed and she shared some other fun fact such as a personal anecdote of Mrs. Pennycuff, his 2nd grade teacher. Jerry met his wife, Wendy, at Main Street School. He has a deep connection. Jerry also showed pictures of himself from Kindergarten through 2nd grade.

Mr. Yockey then began discussion of wanting to be a leader. A leader is a combination of the character traits focused the entire school year: Self-Control, Kindness, Optimism, Empathy, Grit, etc…

Jerry showed three short YouTube clips highlighting leadership. This highlighted communication & being a part of a TEAM. Leaders are not made by titles; they are made by opportunities people act on. Jerry partnered the students to be a part of an activity. He believes stage I in leadership is just saying it out loud; “I am a leader.” The students self-identified personal traits to lead with. Jerry ended with calling students to action. “What are you waiting for; be a Leader.”

I ended the presentation with acknowledging that we all have a little of all of these traits but there are a couple that we self-identify with & others see in us. We should use them in leadership roles and be aware of others we could improve. The students have a role in this school. We have to make sure they have strategies and know how to lead & have “the green light.”

We are a TEAM & we take care of each other! “Be Nice; Work Hard”